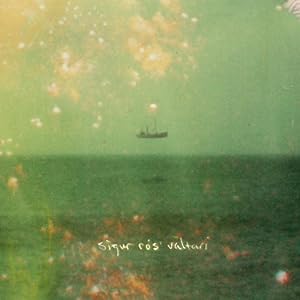 After numerous solo records, Sigur Ros return. It's not a big world they live in (I doubt they will ever show their metal direction, despite protestations that they are), and if anything, their palette, wonderful as it is, is drearily predictable and utterly formulaic these days, half-heard pianos, wordless harmonies, dribbling, leaking guitar and rhythms that stutter. For the majority of this somewhat unmoving record, Sigur Ros stand still. In the best sense of the word, that is, by gazing out. The songs are unhurried, shorn of the relatively conventional idea of choruses and lyrics, instead, focusing on an idea, a feeling.

It's a band that wouldn't exist without an exhausted middle class. Not that there is much in the way of invention here. This could be the same as any record they have made in the past decade : the same, ageless and timeless production, the unmoving sounds of guitars strung to infinity, the harmonies and choruses. Is it any good? Of course it is. It's just the same as their other records, a evocative soundtrack for a tired, exhausted, hopeful meditation, a way of escaping the world as it is, set inside a aural soundscape of joy and sadness – soy, jadness? - that is our world. “Ekki Mukk” though, what a title, hints at the sly humour that often sits within the bands work. It's not exactly an arresting listen, but a meditative one : imagine (and here I used to dreaded words 'post' and 'rock'), that conjurs up the kind of meditative minimalism, where nothing happens, so even the slightest variance is of great import, that characterised some parts of Pink Floyd, and latterly, Mogwai and Explosions In The Sky and parts of Moby's work. Here, the brain rests, goes somewhere else, and explores the inner world, instead of focusing on the prison of bass, rhythm, guitars, vocals, to a more abstract land. Sure, I can talk for paragraphs about this absence as a presence in itself, but more than that, Sigur Ros are off again, making a soundverse their own, creating a record where what you don't hear, what you think you hear, the record in your head that doesn't exist is as important as anything else. A triumph on their own terms.