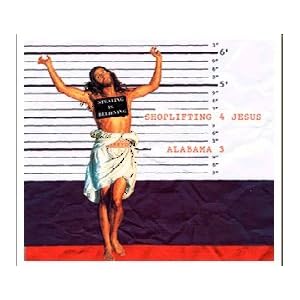 Umpteen albums later, Alabama 3 are a shadow. With a non-existent media profile, and a virtual career, the initial moments, of surprise and joy at their bizarre mix of blues, techno, Elvis, and radical leftwing politics, has numbed.

Would this be the first record you would pull out and show to people to convert them to the world of Alabama 3? No. You wouldn't. After 15 years, would you find new ways to say the same old things, or would you find new ideas? With the original template slowly moving away over time, its diluted now : the female vocals, once chosen as a added element, now - like the obligatory guest rapper - start to drown the record. Especially when on "I blame Kurt Cobain" the mix becomes very busy with riffarama and no room for the songs to breathe. With "We Stole The Moon" there are multiple vocalists battling for melody over what becomes a minimal backing track, and ultimately the whole thing becomes one-dimensional in its mandatory diversity, ever wider and diluted until it barely registers. A shame. Alabama 3 were once a vibrant, focused, musical force. Now they are a fraction of their former power and ability.