GARBAGE Not Your Kind Of People 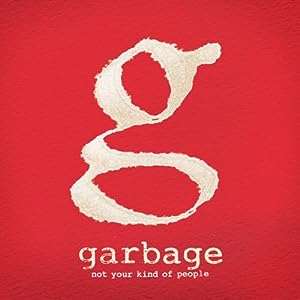 After a few years in the wilderness, the now middle-aged Garbage are recast as relatively elder statesmen, survivors, or whatever other phase you want to use to consider a band that has lasted longer than the average lifespan of a domestic pet. With the reconstituted, and consistent lineup (apart from ever changing Sleeperbloke bassist), Garbage are acting as if nothing has ever changed. To an extent, this is a good thing : reliable, the unchanging hand of this band remains the same. On the other side of this, there's no acknowledgement of any change in the world. Garbage are stuck forever in their 1996 amber : "Blood For Poppies" could have been made at any point since their formation, and been a thoroughly average song.

On a creative level, there's no evidence that the band, the people in the band, or anything to do with the outside world, has occurred at all. The songs continue at the same, grinding, midpaced, "I never really saw you coming in my little prison / your autograph would buy me time" is a sample line (from "Control"), and I don't understand what this means to someone who is 42 (Manson's age). What is this record? An assortment of songs, or something more? It doesn't do anything much.

You can't fault the sonic textures or the production, the layered use of instrumentation, the deft crafting present. But with no progression or movement from the first record, and with no lyrical concession to the changing of the world, the passing of time or the movement of the psyche through the journey of life, there's no feeling of any recognition of anything but abstract concepts. The nearest you might get to an expression of the stonewalled rejection of Manson's solo record hints at some of the lyrics such as the title track, as if Manson were somehow told to go back into the "Box of Expectation" and never crawl out.

Then again, Garbage are on their own label now, pirates of their own destiny, who is to tell them what they can and cannot do anymore? Apparently themselves. It sounds like another Garbage album, like all the other ones. Do you need to be told the same story a fifth time? Maybe not.