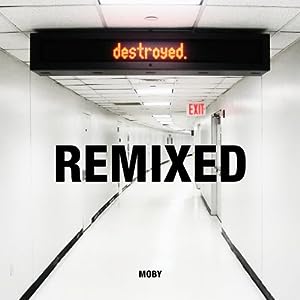 As a cottage industry, Moby must be doing well, I imagine. An album every two years, followed by a deluxe/expanded version with extra songs and a live DVD, and a bunch of remixes in the form of the an extended remix release a few months after that, the Moby business plan has been going strong for nearly two decades now.

The law of diminishing returns must always come to roost, eventually. With the world Moby saturated - the last release was not even six months ago, and came to a whopping triple CD and one DVD box set - this replaces the no doubt enormous girth of CD remix singles and compilation tracks that ten years ago used to be the method in favour of what is, in effect, one very long 12". With 22 remixes of 14 songs, they veer from identikit big stabs of cheap synths designed for places I don't go anymore ("The Big Room"), and places I only visit in my head ("The Small Room"). And everywhere inbetween. I used to say that stuff like this was disco music for people who don't go to discos anymore, and now that I have become one of those people. Sometimes, this stuff is simply boring to listen to : when the extended intro/outros of "The Day" and "Blue Moon" (Holy Ghost!) become largely minimal repetitive bars of average rhythm, the question is, why? There's not necessarily enough for me to listen to here. The aforementioned Holy Ghost track manages to create a wave of NewOrder style hysteria, but it's not long before The Bassjackers do a tedious, instrumental six minute version of "Lie Down In Darkness" that corrodes my interest with a repetitively simplistic, and one-dimensional synth run that has me reaching for the skip button long before the end. The second disc is a largely more relaxed experience, however, contains three barely-different variations mixed by Moby and a heroic, epically boring 34 minute ambient number that takes minimal variation to a degree of detail barely known to human patience.

Perhaps listening to this on the way to work at 8am on a Wednesday morning isn't the best way to devour and experience this. I don't where you would hear it, to be honest, outside of a club : a bored commute, which is where I do most of my listening? Or housework/ Furious ironing? I'm not sure anymore. The world has moved on, and I have moved with it, and these songs are entertaining, interesting diversions and excursions, but not exactly for home listening.
- posted by Mark @ 11:36 pm