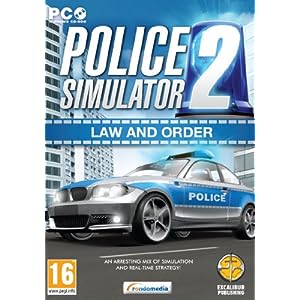 Were this given its proper title it would be "Boredom". In the vein of what the publisher call "simmers" on the inside panels, this makes a potentially exciting and intruiging premise and crushes all the life out of it to make it tedious. With graphics last seen at Sim City in 1994, or perhaps, the original top-down Grand Theft Auto in 1998, this sim is a convincingly counter-intuitative low-grade work, seemingly rattled off quickly under basic skeletal architecture that has been barely updated since the last millenia. Not only that, but there is little urgency, and less advanture. It gets light, then it goes dark, and scrolling around the map is infuriatingly cumbersome. The menu options barely resemble anything user-friendly, with no map, and poor scrolling and commands.

The menu for settings only has volume and sound settings. No settings for controls, customisations, graphics rendering (though it could only look worse on a Spectrum 128 or Commodore 64), and even quitting is somewhat difficult as all the options are either tick or cross boxes. All the user experiences since Windows ME have been ignored in favour of a determinedly retro experience. I'm half surprised I don't have to load this game from tape.

Overall, this is a barely competent beta-test that has been placed on the market without any thought for the player. Who thought that having three random white boxes with no descriptions in them (whereby, I guessed you had to insert the product code) would be, before the game even started, be any indicator of how dreary the whole experience is. At no point did the design team ask even a basic question such as "How does a player understand what is going on?", "Whats the point?", and "Can we make it anymore boring?". If you thought being kettled at a protest was boring and unjust, this game is very similar to that, albeit with the luxury that you can walk away and leave anything you like.

On the other hand, hopefully their next game will be "Simulator Writing Simulator" that involves bored blokes half-arsed compiling flabby and ill thought code whilst eating coffee and drinking junkfood in their cubicle farms on an industrial estate in oxford. Gasp as the team discusses what to simulate next with "Grocery Shopping Simulator!" and "Traffic Jam Simulator 2 : Electric Gridlock."