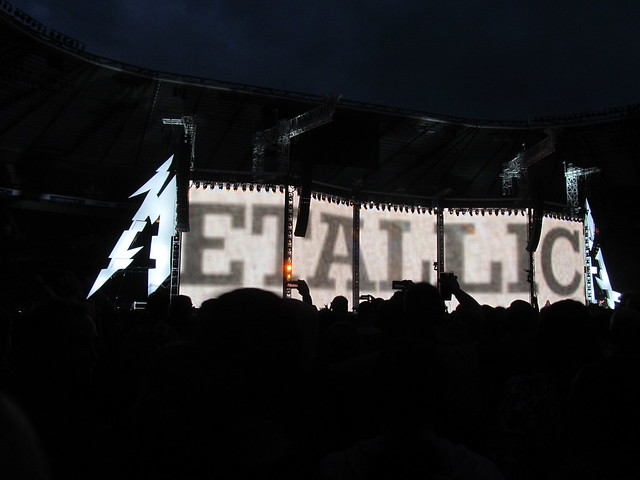 Sometimes it feels like Metallica are an arena rock band cruelly forced into playing stadiums. Twickenham stadium, like most huge, corporate megadomes, suffers from being absolutely bloody enormous. The only way to create intimacy in a venue that takes fives minutes to walk across is to project it on a huge screen. Is to be in a venue so big that the visuals don’t match the sounds because by the time you hear Lars hit the drums, the chap on the screen is half a word ahead sometimes.

And, as James Hetfield says, “It’s not cheap to see Metallica”. At an average ticket price of £100+ including fees, and premium tier seating and ‘golden circles’, it’s just another £10m grossing day at the office for this band. Of course, people wouldn’t keep seeing them, and they wouldn’t keep touring, if their fierce live reputation didn’t sell tickets for them. But sometimes, Metallica 2019-style are a very good tribute act to how good the band were live in 1989.

It seems bizarre that people seem quite happy to lay out £100+ a ticket to see a band they won’t pay £10 for their CD, but people are strange. Especially when their current – high – ticket prices are the result of market testing when they checked, and apparently nobody minds paying more. I mind. Even 15 years ago, when the band cost £17 to see. I guarantee you I don’t earn six times as much as I did then. I wish I did. Going to see Metallica costs the same as a holiday. It’s not a small sacrifice. And my thanks go to Robin, who found himself with a spare at short notice and helped me have a much needed big night out. 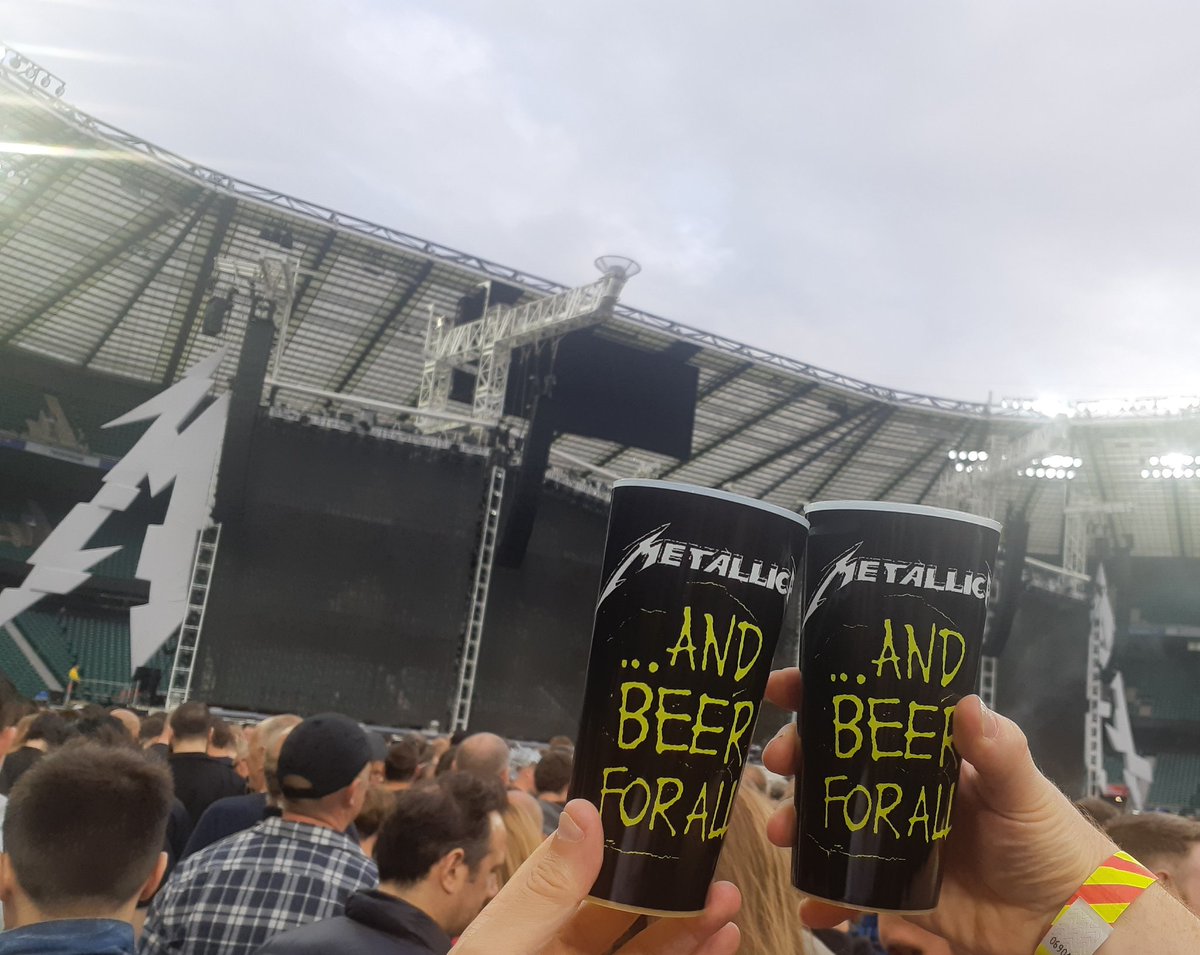 Support comes from the equally strange, and not exactly uneventful Ghost, who are clearly a solo act with the name of a band. And a backing band of seven people in masks that seem to act as their own frontmen whilst all playing the same song at the same time yet seemingly all being the lead in their own solo acts. It’s a strange and unusual experience. I’ve not seen a band seem so less like a band in my life. They’re good, but not great.

And then, with the learned punctuality of a multi million dollar business, The Metallica Express arrives at 8.00pm exactly, for exactly 2 hours and 20 minutes of entertainment. There’s a learned stagecraft in the night. There’s well rehearsed comments, jokes, and platitudes that sound like they’ve been said every night so far. There’s the predictable – and multiple – references to the Metallica Family, as if the band somehow split and reformed post rehab and therapy as a extremely well paying therapy session for the band [or for us].

There’s stadium karaoke – sing with me Twickenham – where the arrangements of the song would collapse without 72,000 subvocalists wordlessly intoning yeah yeah yeah yeah. There’s the sense of watching an enormous television surrounded by drunks. It’s great, crowd pleasing fun. But it’s Metallica as stadium rock. 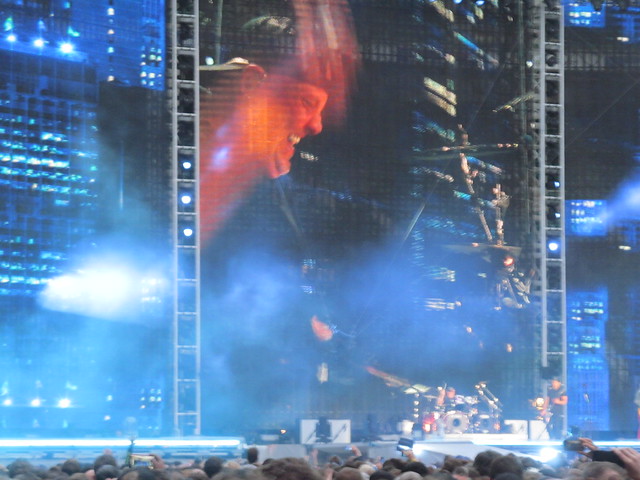 I miss the edge. I miss the fire. It’s not to say Metallica aren’t great – and tonight they probably are – but they are playing like a very big, and much older, version of the band they used to. The set rests on the tried and true, with more than half the set being hits from the days that they didn’t do singles – and they are kind of like a very heavy Grateful Dead. A band that does not chase television or radio coverage, because they’re big enough by now already. The final third of the main set is comprised of exclusively early stuff that is received, much better, than anything else. There’s a run from “One”, to “Master of Puppets”, “For Whom The Bell Tolls”, “Creeping Death” and “Seek And Destroy” that could have come from anytime in the past 32 years. Of course it is fantastic fun and a great big night out.

There’s a sense of something being held back through learned stagecraft and restraint. The hell-bent-for-leather sense of thirty years ago – the live fast, die young, and leave a great record – is missing. To compensate we have big screens, fires, inflatable band members, and rehearsed moves. The compelling, desperate edge that made their reputation is duller here with age and time and work. Nobody can be the same at twice their age than they were half their life ago, nor would I want them to. But what this is is a reminder of what they used to be, in some ways.

Stranded in the transport desert that is Twickenham, it’s not even dark, and the main set has barely crashed to a shuddering halt, before I see the people streaming to the exits. In fact, given the location of their previous gigs – being often in profitably-priced-to-hire-competitive-megadomes on the outskirts of town – I’ve managed to miss the end of more Metallica gigs than I haven’t recently. My choice is either to bail before they play “Nothing Else Matters” and “Enter Sandman”, or to wait for two hours in a mile long queue to miss the last train home.

With the final leg of the three year tour coming to a close this summer, Metallica have become a furious, thrash version of The Rolling Stones : and in no way is that a criticism. They know what the crowd want – and they deliver it with a professional, dry efficiency that betrays a fluent, unconscious stagecraft and assumed knowledge. Like an ruthless joke machine that no longer finds their own material funny, Metallica are instead very, very good at what they do, as a professional cog in a huge multinational business that is in the business of selling T-shirts, beer cups, and action figures. Sometimes the music itself is just another product, and whilst Metallica were great fun and hugely enjoyable, they are no longer an amazingly good thrash metal band, but instead a great stadium rock show experience. 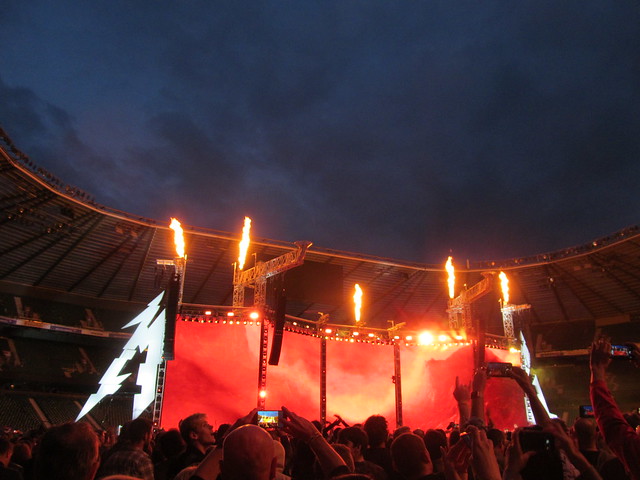 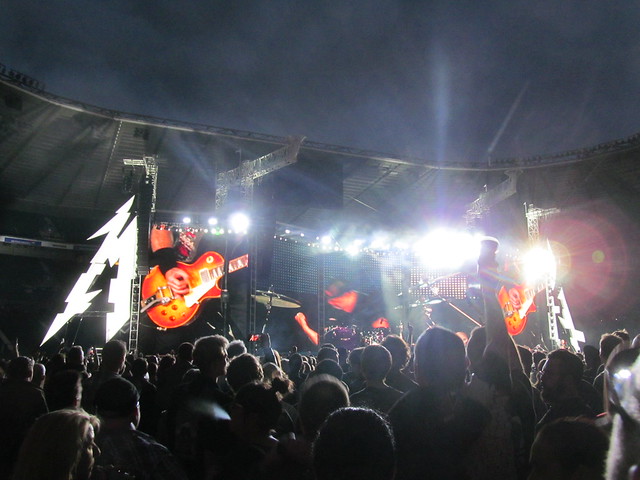