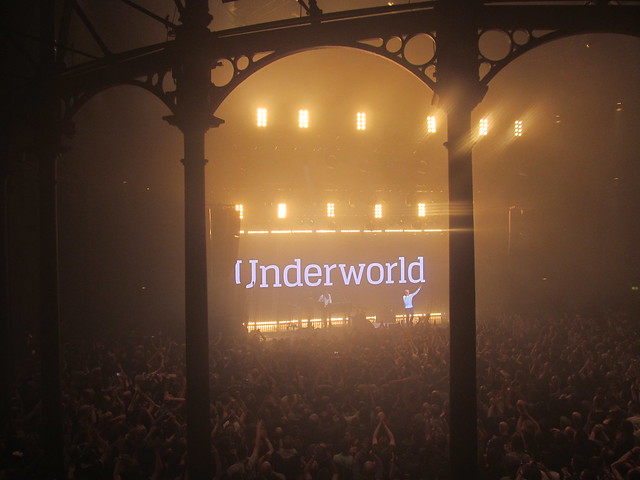 A year after being announced, and in 52 weekly instalments, the physical release of “Drift” by Underworld is finally here. It’s ambitious, occasionally boring, but never..uninspired.

The premise is straightforward : over a huge 7 CD and 1 Blu Ray box set, Underworld present every new and original track they released in a 12 month period : every Thursday they emailed out a link of a new song and normally a visual to accompany it. At this point the band fed on an insanely ambitious workload whilst also playing all over the world on a weekly basis. And hosting an art exhibition in Manchester which also birthed another album – part of which, in an alternate form, also appears here. It’s the kind of workload that would make Prince at his peak feel stretched.

Each album is present in the chronological order of release : as such, these feel like the haphazard compilations that they are and not structured albums with a standard flow and feel. For example, the third track on the first CD – a spoken word piece on the nature of Drift itself – would make a great introduction to the work, but we’re already a quarter of an hour in by the time it appears. The CD’s also contain several extra songs that weren’t quite finished in time but met the overall release date and thus, exist as new additions. And many of the songs have been remixed or rethought since they were first published. And finally, as if that wasn’t enough, there’s the sheer size of all this.

It’s an immense project : 39 audio tracks, alongside 10 alternate versions on the “Sampler” disc, and 31 video tracks, weighting in at a total of ten and a half hours of music – of which six and a half hours come on CD.

The Blu Ray is a weighty accompaniment : over 4 hours and 31 songs from the set with all the matching visuals. Whereas the audio CDs have on occasion been revisited, re-edited, remixed or rethought slightly (“Soniamode” carries a new vocal and lyric, “Appleshine Continum” is edited to a mere 33 minutes instead of the 47 on the BR), the BR contains the original, as released at the time, video/audio mixes.

Sometimes the sheer girth of the release reflects this project for its strengths and weaknesses : there was no time to think, only feel, and to push the songs to a state where they had to, by definition be fresh and to let go of them as they barely become ready. The spontaneity, and the rapid tonal shifts, are an essential part of the projects success. There wasn’t chance to overthink it. (Though as alluded above, some versions were remixed or edited/changed for the box set release and the overall package does hint at a lack of one single overarching vision or theme). It’s almost a compendium of Underworld as is, ranging from the ambient and minimal, to the banging dancefloor thumper, or experimental jazz excursion in repetition in the frankly annoyingly long “Appleshine Continium”. It’s the world of Underworld, covering all their current styles and interests, in one enormous delivery of a frantic year of sound.

There’s a number of missing tracks in this set which will be made available to download with the 8 disc box set : normally re-recordings and reinterpretations of previously released songs in new forms. Since these haven’t yet been released to download, I can only speculate on what they are, but there were an extra 2 hours of extra mixes in those.

For less extravagant consumers, there’s a compelling hour in a 10 track ‘Sampler’ Edition – a Greatest Hits of the material – which boils the whole experiment down to a bite sized compilation of the most accessible selections in new edits and mixes. Some of the choices are a little odd, as some of the most poppy, fast, and straight forward tracks (such as “Dexters Chalk”, and “Another Silent Way”) are absent, but given that there’s so much material here, it seems odd to complain. There’s almost too much.

But aside from the fact that this is a huge and exhaustive compendium of a period of intense creativity, effectively you get 7 new Underworld albums in one go, alongside a huge volume of accompanying films. It’s ambitious, flawed, and absolutely fascinating to see. And it puts other, less exciting and creative bands to shame. 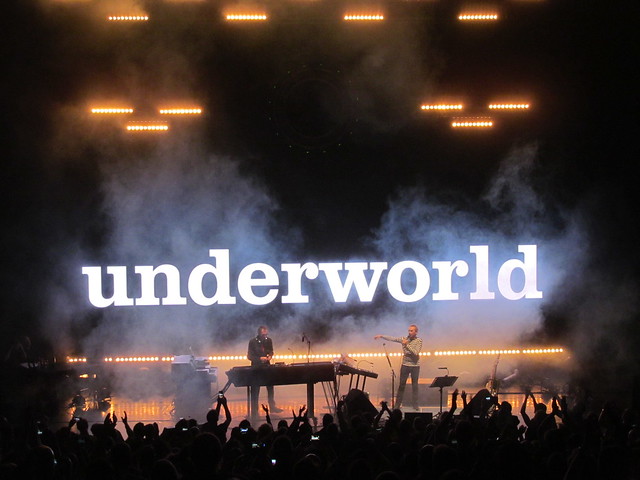