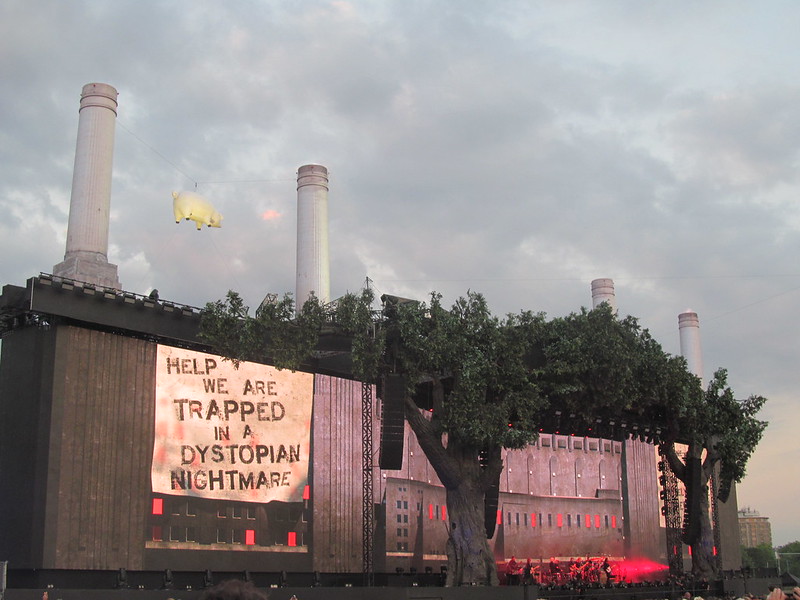 At this advanced stage, Roger Waters has become, to all intents and purposes, at least half of the public face of Pink Floyd. It was all so very different 25 years ago ; Pink Floyd then were an active operation, with Roger Waters skulking in the background like a furious ghost. Now, with the Floyd inactive and two of the original five now sadly deceased, Pink Floyd have become a memory – and if you want to experience even the vaguest glimmer of what it was to have seen them, well, here it is.

With a carefully curated selection of material, “Us & Them” is very possibly the final Roger Waters release ; the summation of a staggering 55 years of music, and at 77, I can’t help but feel that perhaps time is running out. There’s ego at stake too, with all living members of the band touring in the past few years in their respective solo capacities, Waters is keen for us to know how integral to the band his artistic vision is.

Two years after it began in the desert, the “Us & Them” tour came to Amsterdam : and this film presents the tour near its apex. It’s a two and a half hours drawn – mostly – from the Pink Floyd material alongside a handful of songs from his most recent album, the powerful “Is This The Life We Really Want?”. This is a clincal show ; with barely a change in setlist over two years, and its filmed and edited to make clear to you that this is a spectacle. There’s a reach for the grandoise, and perhaps the spectacle overshadows the music. The spectacle is huge : a vast screen of imagery that tells a vague narrative, using recurrent imagery to present a set of common themes, alongside a divisive screen that lowers from the ceiling and erects a virtual Battersea Power Station into the venue. If I were on the wrong side of the screen, I’d be spending most of the second half of the show staring at a screen that obscures the musicians I have come to see, and effectively be watching a very expensive television set.

Musically, it’s a clever recreation of the material : the songs treated with a unvarying recreation of the studio arrangements as if they were classical pieces embedded in memory (which, to an extent, they are). Roger has a virtually new band - apart from Jon Carin on keys/guitar/vocals and Dave Kilminster on guitar and vocals - made of much younger musicians who – perhaps – get to Live The Dream rather than his previous, long term musicians. But there’s also a sense of Yes Men who are here to do as they are told and paid, whilst the focus is on Waters as ringleader. He stalks the stage, leads singalongs, and often – visibly – ceases playing his instrument to bask in glory, alongside an inrodinate number of Shots Of People Crying In The Crowd. It reminds of an Eighties video (apart from the lack of semi naked women on men’s shoulders). And given the contents of the crowd shots, I’m pretty sure that not all of this was shot in Amsterdam. 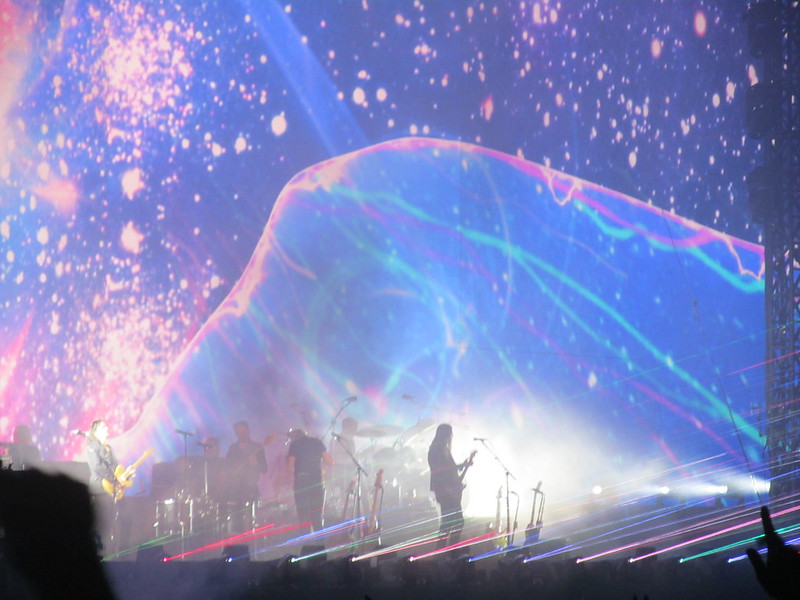 It’s a precise, pointed, and political show. From an opening, and accurate “Speak To Me / Breathe”, the majority of the first half of the show covers most of the first half of “Dark Side Of The Moon”, and ties together the through line that runs through all of Rogers work. In the space of this, “Welcome To The Machine” is the first song that really shows the breadth of the show : it introduces a huge silver ball on screen, that then reappears at strategic points throughout the rest of the show, symbolising some kind of authority, some kind of machine, some kind of control. Other imagery repeats throughout the rest of the show – Battersea Power Station, pigs and animals, a prism of colours – each ascribed a new meaning, and combining together to create a powerful presentation of the music as something much bigger than it once was, with unconnected songs tied together by visual imagery and political themes.

The newest songs sit more than comfortably as the equal of some of the classic era Floyd songs : “Picture That”, and “Smell The Roses” for example, sound like they could always have been on a 70’s Floyd record. In one, particularly important transition, “Us + Them” itself pauses with a new ending, and then “Smell The Roses” slides in seamlessly. Except it doesn’t. As “Smell The Roses” is inexplicably sliced out into the bonus tracks. The line made at the concert, the clear link between then and now, and the important placing of a solo song at the climax of the show, is ruined. Putting this great song in the ‘bonus tracks’ section is nonsensical. And it hardly helps with the perception that Rogers work has been largely irrelevant since leaving Pink Floyd.

The only difference between say, Amused To Death and a Pink Floyd record is, in many ways, the name on the front of the record.

Visually, these newer songs offer a powerful, and unexpected interpretation of the entire body of work. During the middle of “Smell The Roses” the view suddenly changed to the interior of a corridor and a woman sitting on a beach – reversing the same view used as an ambient backdrop before the show itself began, and it recasts the whole show as the fever dream of thoughts running through the mind of a political prisoner ; and if you’re paying attention, it’s a cutting and brutal realisation. Is This The Life We Really Want? But you won’t notice that, because the song is a bonus feature removed from the film and the CD. The film is much less as a result of this decision ; and the editing and filming is insular and intimate at the times the show is huge and outsized. 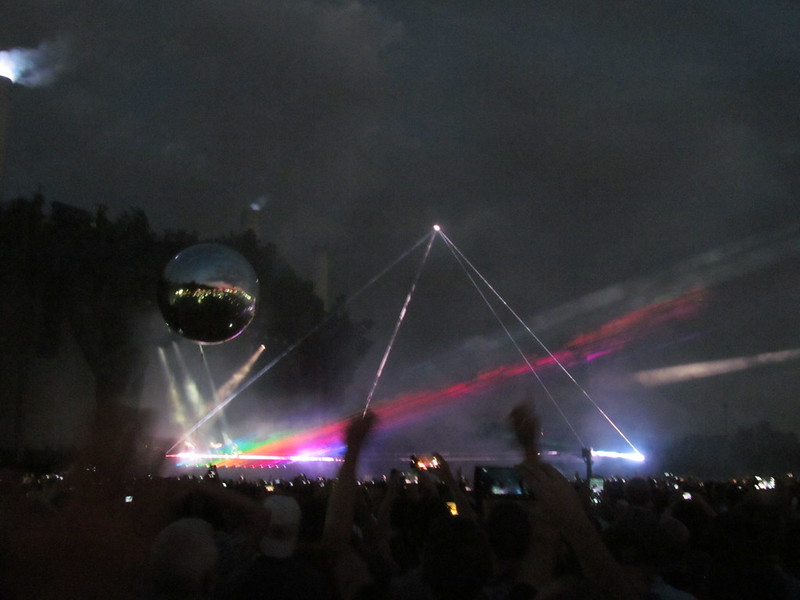 It’s also during “Smell The Roses” that a huge silver ball floats over the crowd, the symbol of authoritarianism that sees over all of us and first seen in “Welcome To The Machine”. The show moves into ”Eclipse/Brain Damage.”, further tying together all the visual themes of the rest of the show into a single whole : as a laser pyramid opens up over the crowd, and a prism of light flies into the distance. You’re only seeing the cover of Dark Side Of The Moon come to life in front of your eyes. (And given that tonight sees 90% of that album played live, it’s also key to see how important this album is to Waters in his body of work.). And there the film ends. But the night doesn’t.

The final song of the evening is a powerful, and necessary “Comfortably Numb” ; (again, stupidly excised to the bonus tracks). In this context, it’s a song about who we are now – we’re comfortable, we’re numb, and what happens around us we don’t feel anymore. It’s a call to arms and a moment of release : is this the life we really want, indeed? Waters is nearly 75 now ; the time has gone. The song is over. I thought there’d be something more to say. Overall, this is a worthy release, but it focuses too much on making sure we see Roger as the focal point of the show, and often detracts from the effectiveness of the huge staging in telling a story to shots of say, crying men singing along. It's very good, but ultimately spoilt by ego and spectacle. It doesn’t feel like the best of the solo Floyd concert releases, but its probably the most representative of the Roger Waters live experience. 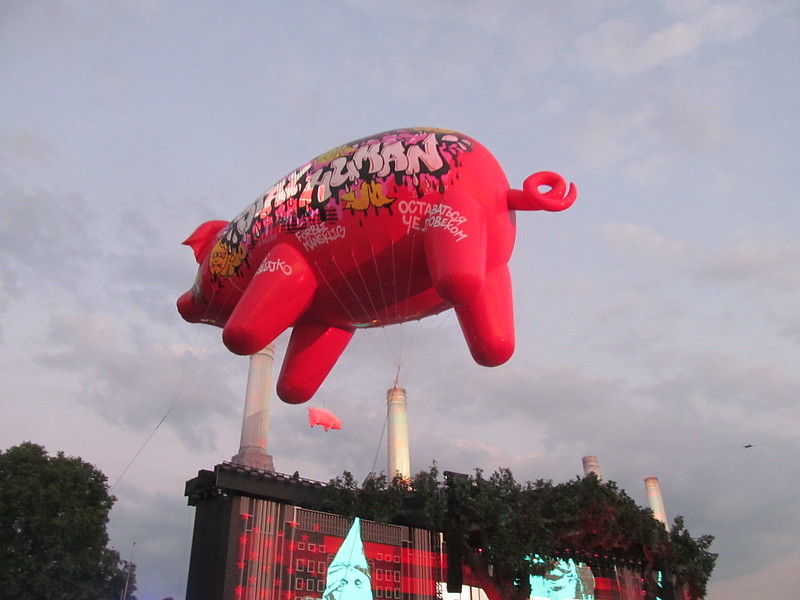